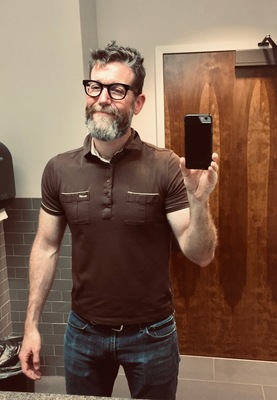 Brian Hitselberger (b. 1982) is an artist living and working in Lafayette, Indiana.

His installations, paintings and works on paper explore a variety of themes that shift between subjects and perspectives alternately intimate and immense – occasionally within the same piece. Often working in series, his modestly-scaled paintings and drawings employ detailed mark-making, dense layering and unexpected relationships between form, content and material, yielding works that strive for optimism without simplicity, and privilege wonder over resolution. Recent subjects include sleeping and dreaming, hate speech, drag queens as spiritual healers, and queer magic.

His work has been exhibited widely, primarily throughout the Southeast and the Mid-Atlantic. He has held residencies at the Elsewhere Artists Collaborative, the Hub City Arts Initiative, and the Hambidge Center for the Arts. He has received funding for his work from the Georgia Council for the Arts, the Willson Center for the Humanities, the Andy Warhol Foundation and the Indiana Arts Commission.

He received a BFA in Printmaking from Tulane University in 2005, and an MFA in Painting from the University of Georgia in 2010. He is currently Senior Lecturer in the Rueff School of Design, Art and Performance at Purdue University.

His work can be found at {Poem88} Gallery in Atlanta, where he is represented, and at Printed Matter in New York.
Loading...